In the beginning of July the 5 days of Italy took place in the stunning scenery of the Dolomites, and more precisely in Auronzo di Cadore.
The PWT Elite Team had a great start, and in the opening sprint stage completely dominated the men’s elite class. Even if both Riccardo and Sebastian were going through a high intensity training block, they were able with a stable race to set the fastest times of the day, with a considerable gap to the rest of the strong starting field. 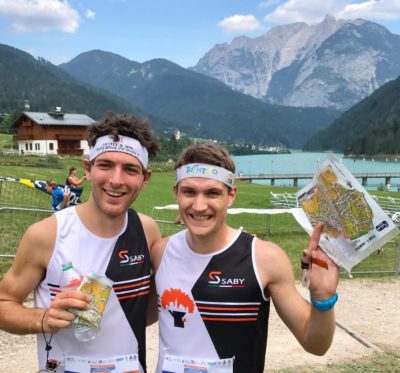 Since Riccardo had been training in this beautiful region for almost 2 weeks, he already absolved a few key sessions towards the world championships in the forests where the next stages took place, and therefore was not allowed to compete in them.
Sebastian on the other hand planned to combine all the races with some other important training sessions during the week, trying to focus on technique rather than on speed.

The stages went by one by one, all of them on incredibly interesting terrains and in breath-taking surroundings. Sebastian, after loosing quite a bit of time on the second stage, where as one of the last starters he got into a heavy ice-storm, was able to regain positions constantly thanks to stable races. Before the last day, an overall win seemed impossible: he was placed 3rd, 5’55” behind Martin Johansson (double bronze winner at WOC 2008, severely injured in 2009 and after that elite cross-country skier) and 4’15” behind Elias Backlund Ekvall. At this race our runner decided to run very offensively, risking a bit more doing big mistakes, but taking the chance to improve his overall placement. After a great start he caught up Elias, who started 2’ earlier. After a head to head run the two athletes couldn’t get rid of the other, and so they crossed the finish line together. Martin on the other hand struggled in the very technical section of the course, and fell therefore behind the other 2 runners in the overall ranking. Sebastian did not manage the “mission impossible” of winning the overall, but was very happy with the silver medal, especially considering the extra trainings he was absolving during the week and the high level of the starting field!
The preparations for our top runners Riccardo and Sebastian are now going on very intensively, as they want to be on the top of their possibilities in the middle of August, when they both are going to run the world championships in Norway, good luck! 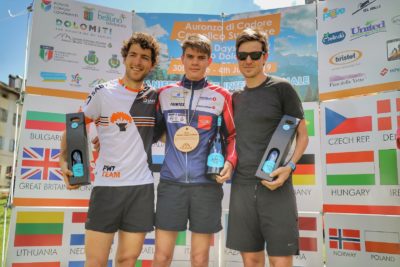