I got the chance to speak to Emil after the last stage of the first week of the FIVE + FIVE in San Martino. 4 wins out of five on M21 gave him a convincing win overall.

If you don’t know Emil, he developed a habit of finding orienteering controls very quickly in the ‘noughties’. He got so good at it he was Sprint World Champion in 2005 & 6, as well as European Sprint Champion an unprecedented 4 Championships in a row: 2002/4/6/8. He almost made it 5 in a row in Hungary in 2010 but only came away with the Bronze. Before you start to feel too sorry for him, he is also no slouch in the Forest with a WOC Gold from the relay in 2003, plus a Silver and 2 Bronzes, plus a Bronze in the Long from 2003. He has 8 World Cup wins to his name.

Born in Växsjö, Sweden, and running in the Swedish National Team for many years, he now calls Halden in Norway his home.

In more recent years he has still been able to give the current 21s a run for their money, winning the Norwegian Sprint Championships in 2015. Now he is 43 and running the top Men’s category here in Abruzzo.

What are you doing here? I ask. I am here with my Family; the kids have school vacation this week and we wanted to come somewhere warm and where we can enjoy some orienteering races and the beach, and the amazing Italian towns.

Have you been before? Not to this area but a lot to Italy in the past. It is my first FIVE + FIVE, but I have done MOC before many times, running as an athlete, as a coach for the Norwegian Team and this year I was Head Coach for the MOC Sprint Camp. I have done a lot of Sprint Orienteering in Italy and I really enjoy it.

What is so special about Italy for you? Of course you find beautiful places in other countries but for me Italy is a country I enjoy, especially for Sprinting in old Town and City centres with plenty of narrow streets with difficult, tricky orienteering – something you won’t get in Scandinavia at least. And then there is the Italian food and atmosphere. The people are really nice and I am in enjoying it here.

Do you think Gabriele Viale does the best prize-giving ceremonies? Yes! By a margin. It is a bit special. We don’t have these kinds of events in Scandinavia. Like today, the town got its first Orienteering map, and they have got 200 school kids involved and trying to find some controls as well as interacting with the visitors. It adds something extra to the races. It’s really relaxed. No pressure. Nice orienteering.

What did you think of San Martino today? It was really special. You don’t know what to expect. It was tricky and I got lost a few times, running into dead ends which is not usual! I was really quite bad when I ran! A lot of stairs and up and down. It was an interesting area! 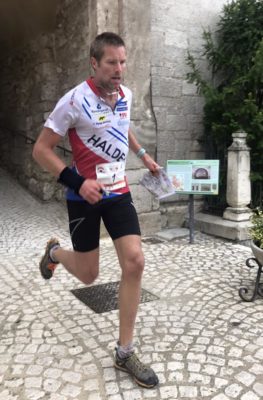 What would be your advice for running in an area like this? You have to be careful and know where you are going all the time. It is good advice to check a bit extra. Today I just assumed a staircase would end up where I wanted to be. But if I had checked more carefully I would have seen it ended up in a wall! Which I could not get over of course.

Do you not try to avoid stairs? On some of the legs I tried to take the larger roads if possible. Often I just try to take the first choice I see which seems ok. And trust that isn’t too bad. Instead of stopping and really making a well thought through choice. I mean often you need to trust your intuition and with some experience that is usually good enough.

And what about your three children? So they are 9, soon 11 and 13, so two are running in the 12s class and the older one in the 14s. I think they are enjoying it. The older one isn’t so keen on training or racing that much but he is enjoying these tricky sprints. Something is happening quickly, all the time, and you have to make lots of fast decisions, which he likes. The other two are more into competing and racing, so you will see their moods going up and down depending on their races. They have won some stages, like the forest stage, but they have made some mistakes in the town sprints.

Would you recommend Italy? Yes, definitely for Scandinavians who enjoy Sprints and want really tricky Sprint Events. Italy is Number 1. Of course you have these kinds of towns in France and some in Spain and Portugal, but the number of towns and areas you have in Italy is enormous.

For next year’s MOC Sprint Camp, which I am Head Coach of, I will do most of the planning and see to it that the maps are up to ISSOM standard. I will go once to visit before the camp but you can do a lot from home using Street View. I am not doing the actually mapping of course.

Is the MOC Sprint Camp just for Elite? The Camp is for the Elite but the races at the weekend are open for everyone. And when I say the Camp is for Elite I mean like Junior and Senior club runners who run Elite classes normally as well as National Team runners. We will have two race days, one with a qualification and final, and one knock-out day, with at least 3 heats. A bit like the one in Prague at the World Cup Final this weekend but without the Prologue. This is because it is a training camp so we get everyone running all of the rounds, so things take a bit longer. I don’t think we have opened entries yet but there are likely to be places for 150 or so runners. Some National Teams like Norway, Sweden and Czech Republic have already said they are coming. For non-National team runners or some of the smaller O Nations it will be a great chance to train and learn from the World’s best, in some of the best Sprint areas in the World. It will be great fun.

But before we go I want to ask you about a story I heard about you. And that was that you were banned from working with any National Teams in the last year for WOC 2018. And I know you have been working for various National Teams in recent years. Your skills and knowledge are in great demand. So Yes, the IOF Foot-O commission banned one coach and that was me. And that was because after leaving the Norwegian Team Coaching at the end of the 2016 season I had not looked at where the upcoming major races would be. I was asked to come with the British Team on a training camp to Estonia for WOC 2017 earlier that year. We flew into Riga and I had 4 hours to wait for GBR runner Alice Leake to arrive as I was giving her a lift. So what was I to do with the time? I had a hire car, so I stood at the airport thinking, should I go to the beach for a run or the City? I decided on the City and had no idea that WOC 2018 Sprint would be there. I record all my training on Strava. So of course, someone saw my run and I got questioned after about it.

So are you working with any National Teams now? No, not at the moment. I do actually have a 100% full-time job as a researcher in Halden at the Institute for Energy Technology, so we do different types of research within the Energy Sector mostly. We had a Nuclear Reactor in Halden which we have recently shut down which we don’t know what do to with. So we are currently working quite a bit looking into the best way to decommission reactors.

Emil – thank you very much. 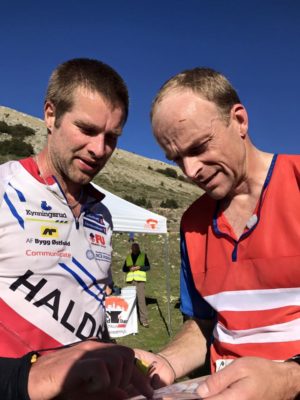