PWT caught up with orienteering stalwarts Dieti Venhauer and her husband Otto, from Austria, who were enjoying a break in the sunny main square of Lanciano after stage 2 of the second week of the Five + Five 2018. Dieti is, at the time of writing, 3rd in the W70 category and Otto is leading M75 with convincing wins on both days.

So what brings you here? Dieti explains: We live near the Austrian border with Italy and always look for exciting locations to go orienteering. We know that it’s always good at the Five + Five so we like to come!

Otto adds: We also know it’s a great get-together, nice and sociable. The races are interesting as they take you to many different towns – old towns with small alleys and historic centres.

Do you have anything similar where you live? We do have historic towns but not with the same kind of small winding streets and detail. We really like this kind of thing – similarly we like to run in Venice as there are so many little streets.

Dieti says: We’d never have come here were it not for the orienteering! It’s only thanks to orienteering that we see places like Lanciano – we must have gone past it on the highway 20 times and seen the sign but never actually been to visit.

Otto and Dieti have already been rather busy on this particular trip to Italy: Last week we spent our time in the Gran Sasso area, where Italy’s highest mountain is. (Corno Grande is the highest mountain in the Gran Sasso massif in the Appenines, at 2 912 metres). We took our mountain bikes and did some cycling and walking. We stayed in a lovely place which is fully modern and renovated on the inside but kept looking like it’s 500 years old on the outside!

We travel to Sweden a lot too; we’ve done the O-Ringen many times all around Sweden.

So you’re very well-travelled orienteers! And this week you have orienteered rather well? Dieti laughs, yes, I am happy to find all the controls but there are others who are faster! Otto is doing very well:

I am also a good runner in my class in Austria. Town sprints are my favourite but I like long distance in the forest too though! I have this year had some knee pain as I have been working on a map in Austria with a lot of steep up and down – not good for an old man! It’s getting better though. We’ll see how it is tomorrow with two races.

Dieti remarks: We liked today’s race in Lanciano more than Vasto, without the tough, steep start and finish!

Otto tells us, we are members of an orienteering club back in Austria, OLC Union Viktring, and we make maps there…

I’ve done the maps for about 15 – 20 Championship events in Austria and planned all the courses. We are very active in our club. Our son, an M40 is actually club chairman and our daughter, a W45 is also a talented orienteer, as are our four grandchildren.

So you’re all in the same club? Yes, Otto smiles, ‘our’ club! 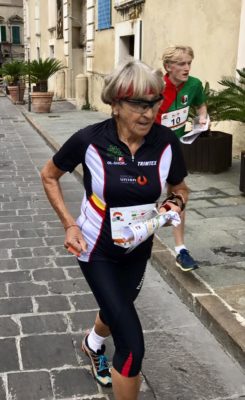 But we are here on our own this week, Dieti clarifies, as they are working and we are retired so we have lots of time for travel. We have our own car here but we are using the bus during the Five + Five as the mountainous drives are not always fun! We were at the Scottish 6-Days once with our car and it was pretty challenging having to drive on the left.

It sounds like Otto, you put a lot of time into orienteering! How long does it take you to do a map, for instance? It is hard to say as I don’t do all the work concentrated in a short time. A good mapper might take a month on a map but maybe I take a year! I enjoy it, I travel to the area and spend 3 or 4 hours there, then there is work to do on the computer, maybe I don’t go back for a while.

And what do you get up to when your husband is mapping Dieti?! Oh I do many things! I like to read, to spend time with my grandchildren – they keep me really busy! We have a sailing boat as we live on the edge of a lake, we go cross-country skiing and downhill skiing, mountain walking…

Next week we will do the last of the 10 Austrian Cup races in Graz: a night race on Saturday followed by the long distance on the Sunday. Then in November we will go back to Venice for the City Race. It has become a bit of a tradition, to start the orienteering season with the Lipica Open in Slovenia and end it with the Venice City Race. We’ve done this for about 20 years! Some years they’ve had a few problems holding the races but now they do a night race and a day race and we really enjoy it.

So does the snow stop you orienteering in winter where you live?

Once but never again! It was about 1984, after we’d just joined our club, and we agreed to host a ski-orienteering championship. There was loads of rain on the day of the competition and the police turned up to make us stop the competition! But the competitors were already out…they were basically swimming! It was like a river with skiers going down it – I have the photos at home!

Thank you, Dieti and Otto, for your time this evening and your lengthy contribution to orienteering – enjoy the rest of the week and we hope to see you back at future Five + Five events!