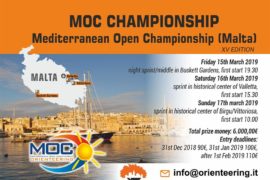 Friday 15th March
Malta’s capital is Valletta, which is the smallest national capital in the European Union,
and the southernmost capital of Europe.
In its historical centre we will have the Stage 1 of MOC Championship 2019.

Saturday 16th March
The Stage 2 of MOC Championship 2019 will be held in a unique forest in the area
surrounding Valletta city.

Sunday 17th March
The Three Cities is a collective description of the three fortified cities
of Birgu, Senglea and Cospicua in Malta. The oldest of the Three Cities is Birgu, which
has existed since the Middle Ages The other two cities, Senglea and Cospicua, were
both founded by the Order of Saint Johnin the 16th and 17th centuries. The Three
Cities are enclosed by the Cottonera Lines, along with several other fortifications.
The cities were besieged during the Great Siege of Malta of 1565, and after the siege
was lifted Birgu was given the title of Città Vittoriosa (=victorious city) and Senglea the
title of Città Invicta (=invincible, not beaten city)
In Birgu/Città Vittoriosa we will have the final Stage of MOC Championship 2019!

Monday 18th March
Ferry to Sicily/Pozzallo
Transfer to Ragusa city for shot-orienteering and free time for lunch.
Ragusa, UNESCO site, the southernmost city of Sicily and Italy, lies at the same latitude of Africa.
The origins of Ragusa can be traced back to the 2nd millennium BC.
The city has two distinct areas, the lower and older town of Ragusa Ibla, and the
higher Ragusa Superiore (Upper Town). The two halves are separated by the Valle
dei Ponti, a deep ravine crossed by four bridges,
In the afternoon, transfer to Noto town for free time.
Totally destroyed by the 1693 Sicilian earthquake, and totally rebuilt, the new Noto is a
masterpiece of Sicilian Baroque and now UNESCO’s site.

To follow, wine tasting of Sicilian wines, and then transfer to Acireale, for dinner in the hotel.

Tuesday 19th March
In the morning, excursion to Etna Vulcan, with competition in the forest.
In the afternoon, return to hotel and free time to spend on the beach or for visiting Acireale town centre, or if a group is interested, excursion to Taormina.
Acireale, a coastal city, is home to numerous Neo-gothic and Sicilian Baroque churches.
Taormina, is a worldwide famous town, touristic and classy, which lies on a hill above the sea.

Wednesday 20th March
Departure to Calabria, the southernmost inland region of Italy.
Free time for lunch in San Giovanni in Fiore town.
In the afternoon, orienteering competition.
Dinner in hotel in Rende town.

Friday 22nd March
In the afternoon, competition in Ascea historical centre. Ascea is a village probably founded around 1000 DC, which lies inside the National Park of Cilento e Valle di Diano.
Dinner in hotel in Paestum.

Saturday 23rd March
In the morning, competition in Paestum Archeological Park.
Paestum was a major ancient Greek city on the coast of the Tyrrhenian Sea in Magna Grecia (southern Italy).
The ruins of Paestum are famous for their three ancient Greek temples in the Doric order, dating from about 600 to 450 BC, which are in a very good state of preservation. The city walls and amphitheatre are largely intact, and the bottom of the walls of many other structures remain, as well as paved roads.
Visit to “Il Tempio” cheese factory, and possibility of lunch with cheese menu.
Dinner in hotel, banquet with music show.

Sunday 24th March
Competition in Benevento city.
Benevento, founded before 280 BC, was then conquered by Romans.
The importance of Benevento in classical times is vouched for by the many remains
of antiquity which it possesses, of which the most famous is the triumphal arch erected
in honour of Trajan by the senate and people of Rome in 114, with important reliefs
relating to its history. Enclosed in the walls, this construction marked the entrance in
Benevento of the Via Traiana, the road built by the Spanish emperor to shorten the
path from Rome to Brindisi.

After the competition, transfer to Rome for departure flights on 24th or 25th March.