Felice is currently in 5th place on M60. He is travelling with the Swiss tour group ‘Ulu’s Reisewelt’, staying in the PWT event hotel Excelsior, and hails from St Gallen, in eastern Switzerland.

So I didn’t initially recognise you as a priest – no ‘dog collar’? No, I do not always wear one. In fact, it’s not all that common in Switzerland, but when I go to places like Italy I take one with me. I have one packed on this trip!

It was very steep today, but perhaps you are used to that being Swiss! Yes, we have a lot of mountains! Today from #4 – #9 was a huge uphill (on M60 course two, stage 3 of Five + Five week 2). I also like sprint orienteering and how PWT takes you to all the interesting cities. I have been to Sardinia with PWT before and if I have time I will go on another trip. It’s not always easy for me – Monday to Friday is fine but then on Saturday and Sunday I have to work as I am one priest with seven churches in my parish. 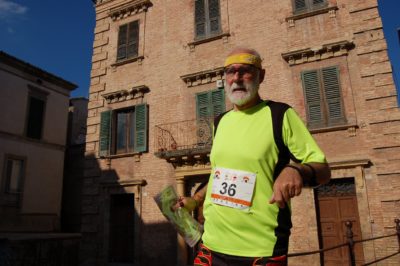 And are you required to say Mass every day, even when you are orienteering? Yes, at home, but when away orienteering, that’s different: whenever possible, yes I do, other weeks it is just not possible. But then at home I have one, two, maybe three Masses as we are not enough people. On Friday we can have four Masses! So then I think it is ok to have one day without saying a Mass.

Isn’t it difficult to go orienteering as often competitions take place on Sunday mornings? Yes that’s very difficult. I am very involved in many areas of orienteering though. I used to be president of the Foot O commission for Switzerland. That’s a lot of work organising and planning. I am on the IOF Rules Committee and I am an IOF Event Advisor. I am the Event Advisor for the Swiss O Week 2019 in Gstaad. So I can do a lot during the week, but Sundays – not so easy! Even when at home. So last week I went orienteering on Friday and on Saturday, came home to work on Sunday then travelled out with PWT on Monday. This Friday I’ll go back home. I live at one of the churches and cycle or drive between the churches. Actually, my parish house is at Rapperswil where WOC 2003 Sprint was and there was a control right by the church but I wasn’t in at the time!

It sounds like you must speak a few different languages…yes, Swiss German, English, German and some Italian and French. Then there are the old languages that we (priests) need: Ancient Greek, Hebrew and Latin. Masses are in German, only one or two a year in Latin. We have recently been in discussion regarding other languages to say Mass in for immigrants and for people who come to Switzerland to work for half the year, but tend to speak English, the business language. So we have a project ongoing to provide Mass in a combination of German and English. The new idea is to say some lines of the Mass in German with the English translation in writing in a booklet, and then swap to a few lines of English with the German translation, the idea being to bring all the people together into the same Mass.

I don’t meet many priests who are orienteers! No, me neither. We have two or three friends within the Protestant church but not the Catholic church. I fact we don’t have many sportspeople within the Catholic church in general. Myself, I like skiing, ski-cross, canoeing but most priests don’t do any sport. It’s a lot of commitment. 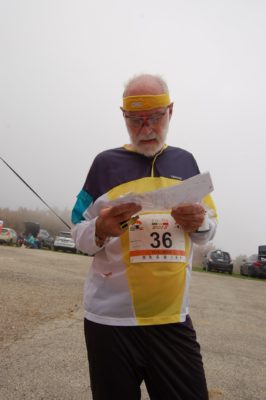 Do you ever get asked to say Mass at orienteering events? Yes and no. I don’t remember ever doing it at a foreign event but in Switzerland, at the Swiss O Week we have a service. So this coming SOW I will be there with two other priests and at the last SOW I said Mass too, during the week as well as the normal weekend services. But otherwise no, it’s not usual at Swiss sporting events other than National shooting events! And on 3rd November, there is a Mass said for the hunters, on the feast day of St Hubertus, the patron Saint of hunters (also of mathematicians, opticians and metal workers!) from Germany. Mass is followed by an ‘Apero’, something small to eat, before everyone goes hunting, then finally there is dinner! There is not really a patron saint for orienteers!

Are there any other ways in which your faith and your orienteering are hard to combine? I would say no. In Switzerland one person does a lot of different things. My first profession was as an engineer. I was an officer in the Army, in the Air Force, I’m a Catholic priest, which I became when I was aged about 30, and I’m an orienteer, which I started more or less at the same time. I think it’s possible to do and to be many things.