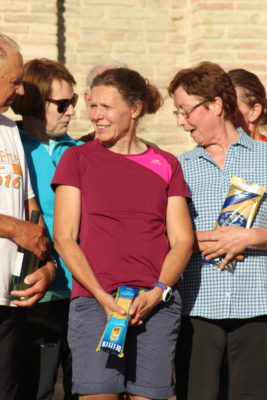 I caught up with Sabrina after Stage 5, Week 41 of the FIVE+FIVE in Montorio nei Frentani, Abruzzo. Local musicians had been entertaining as we waited for the prize-giving with the local Mayor.

If you have not heard of Sabrina, she ran in 8 WOCs in a row from 1987 to 2001 for Switzerland, managing a best of Bronze in the Relay in 1997, 7th in the Long the same year and 9th in the Middle in 1999. She has two Bronzes from World Cup races too. Where does such a former star choose to spend her holidays now? At the FIVE+FIVE… 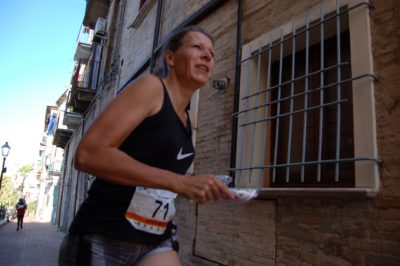 How have you been enjoying your week? A lot! We have come here for maybe the tenth time now. We like to come to Italy in the Autumn and enjoy the nice weather and food, and these special races. It is always a lot of fun.

How did you like the forest two days ago at Passo Lanciano? It was nice although I don’t really like downhill running, especially in the afternoon, it wasn’t my favourite terrain, but it was nice forest and it was fun. I think it is nice to have this mix of races in small towns and in the forest.

Who have you come here with? We normally come with the family and my children, but now they are a bit older they prefer to be doing their own thing. So the younger one is in Sweden at an Orienteering Gymnasium in Stockholm for an exchange year – Fredrika Bremer, the students who started the Stockholm Indoor Cup (SiC). The older one has gone to visit the younger one this week which is why they are not with us this time. But they have been with us many times before. 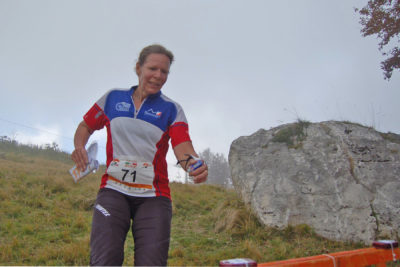 How have you been doing this week? Three wins out of 5! So, I am happy. The results are perhaps not so important. I think we all run for fun and try to do our best.

So, you would recommend Italy and the FIVE+FIVE then? Yes, and we always wonder why there are not more people coming, especially from Switzerland. All the times we have been, we have had a great time. Well organised. Super fun.

Last week we had more. Yes. Some Swiss regions had their school holidays last week. But actually, I quite like a smaller group. You have a shorter queue for the toilets! And some of the villages or towns are so small, so a smaller group can be better. 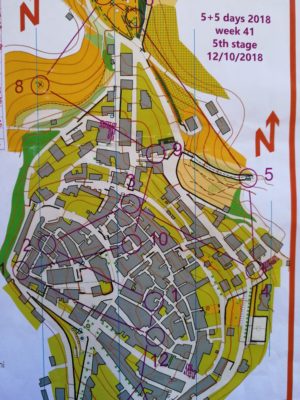 What did you think of todays scale of 1:2500? Well the race goes very quickly! There was no problem to read the map. I didn’t think about it. Maybe it was due to the scale!

Will you come to Sardinia for next year’s FIVE+FIVE? Yes, it is probable, but we usually don’t plan so far ahead. I can definitely imagine it.

And I also like the fact that there is plenty of time to do some other things as well as the Orienteering. Yesterday we went to San Martino, one of last weeks areas, where there was a gorge you could walk up. We spent several hours walking. It was very scenic.

Prize-giving calls. Many thanks Sabrina and hopefully see you and your family in Sardinia next year!