I met Ruth in the Lobby of the Hotel Principe in Vasto.

Hotel Principe is one of three exclusive hotels which PWT Italy are using for the first week of the 5+5 2018, and only 100m from the beach and sea.

‘Who are you and why are you here!?’ I ask. ‘My name is Ruth Humbel from Cordoba Orienteering Club in Switzerland. I am here on holiday for both Orienteering and relaxing with some of my family and my club. I came to Sicily to last year’s 5+5 which was amazing. The sea was really warm for swimming in. I love Italy and wanted to come again.’

She goes on to explain that her 28-year-old daughter is here running W21 whilst she is running W60, with 2 wins from 4 races so far. Her 87-year-old father is here too taking part and one of her two brothers, together with his family. Dominik Humbel is 10 years younger than Ruth and was part of the winning Swiss Relay team at the 1993 WOC in the USA. Ruth’s younger brother by two years is Achilles Humbel, who was one of the key organisers of Swiss O Week in Zermatt, 2014. She really is part of an Orienteering Family.

‘Have you been to Italy before Sicily 5+5 last year?’ ‘We also came to Venice for the World Championships in 2014. I really like Italy as it is so relaxed and stress free. In fact, I was there for the Venice City Race about 35 years ago and there were very few tourists, like on the Rialto Bridge. I think it was 1982 I was there on a trip organised by Peo Bengtsson.’

‘When did you start Orienteering?’ ’47 years ago when I was 14 or so. At school we could only run 600 metres, and I liked running. But I had an Uncle who ran orienteering and me and my brother could go Orienteering with him. Fast forward and I did my first World Championships in Scotland in 1976.’

She is perhaps too shy to say she went on to get 3 bronze medals herself from the Relay at WOC and a best Individual placing of 4th from Thun in 1981 at her home WOC. She stopped running for the national team in 1987 with her last WOC when she was 30 years old.

‘Was it always easy to race for you?’ In Hungry and France at WOC I missed one control and it was really frustrating.

After the World Championships in 1981 I had a problem with my right calf and was told I would not be able to run again. In Finland I had physiotherapy which luckily solved the problem.‘ 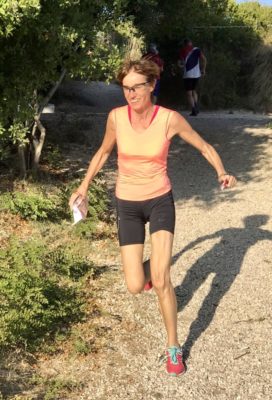 ‘Were you ever a professional Orienteer?’ No, I was always studying and then working.

‘When did you get into politics?’ When I was 24 and thought I might not run again, I was elected into the District Canton Parliament of Aargau. I was young! I was elected to the National Parliament in 2003. My Canton of Aargau elects 16 members to an Assembly of 200.

‘Did you ever want to go back and run in the Swiss National Team again?’ In 1993 I won the Swiss Long Distance Championships because I was angry! I was 7th or so in the National Rankings but I was made to start first because I was old and no longer in the National Team. I wanted to show them. And the selectors became nervous as they had to offer me a place on the WOC team to the USA, as it was a selection race.

And did they?’ ‘Yes, of course, they had to, but I wasn’t in the National Squad anymore and I had a small child and a job, and I could not train so hard. I thought the younger runners should go so I turned the offer down.’

‘How much Holiday Orienteering are you doing this year?’ ‘This week now and European Championships in Ticino in May. I try and do a week or two each year. I did Swiss O week two years ago in St. Moritz and I will be in Gstaad next year for SOW 2019.

‘What does your job as a Member of Parliament in Switzerland involve?’ ‘I sit on the Health Commission so am involved in lots of things like Health Insurance and Pensions. I sit on various company Boards like for a big Hospital and Insurance Company. I work about 40 hours a week, so full-time. Some of these issues we deal with are becoming more important as the population gets older.’

‘Are you ever able to mention Orienteering in your work?’ ‘Well of course in Health Politics prevention is paramount. People do not move enough. And Orienteering gets you moving! Even my 87-year-old father can do it which is great. But not so many people Orienteer in Switzerland. There are so many different types of sports and Orienteering is still small. Biking for example is much easier. You just need to get some bikes. Orienteering you need a map and controls, plan a course, and so on…’

‘So back to Italy and what do you think of PWT Italia’s 5+5 2018?’ ‘I very much like Italian food and Italian wine and the Italian kind of life. It is not so stressful. Like yesterday when we got to stage 3 and the start was 15 minutes earlier than expected. Life isn’t so regimented. It’s like a holiday. Take two days ago at Stage 2 in Casalbordino. We had a spontaneous party in the town in the evening. Nicola Manfredi started singing. People are also really kind. Gabriele is very friendly. It is all very good. They have people from Scandinavia helping doing the mapping.’

‘Would you recommend 5+5 to people back home?’ ‘I recommend going to 5+5. Last year in Sicily the sea was warm enough to swim in. It is good for families to combine Orienteering with relaxing. This coming weekend we have some important Swiss ranking races so some are going straight back for these races to do them and some are doing those races and coming for the second week of 5+5. But I think the 5+5 isn’t so well known in Switzerland. I was at the Cyprus 5+5 the first time and it was beautiful.’

‘And why are so many of your clubmates here?’ ‘Well we have about half the club here, 70 or so people. OLG Cordoba. It is the first time we have had a Club Holiday like this. When we helped out at Swiss O Week, the club got money and we used it to help pay to come to Italy.

It is good we can come out, especially for the Juniors, as we have a lot of similar aged Juniors who can compete against each other.

Many thanks Ruth for talking to us and Good Luck for Stage 5!